In Part 1 of my Dragon Warriors RPG review, I touched on character creation.  I will now describe a bit about the different Professions that can be chosen.

Knight
These appear to be the classic Arthurian knights, generally coming from warrior aristocracy.  They are the only profession that can wear plate armour without penalty.  They also have the best Defence of any profession.  Knights receive several special abilities at Rank 1 (Track, Armour Expert and Ride Warhorse), and a host of new combat abilities at Rank 8.  Player Tip: Choose a Knight if you want a "Tank" character who can withstand many blows, or if you like the idea of a PC who lives by a chivalrous code. 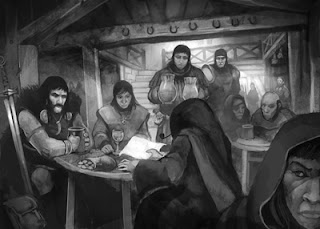 Barbarian
These are the hard-eyed, battle weary savages that can draw inspiration from sources such as Icelandic Vikings or even Conan of Cimmeria!  Barbarians are hands down the best offensive profession, wielding huge weapons that can hack through any armour.  Defensively, they are not as tough as Knights and can only wear up to chain mail, suffering penalties if clad in plate armour.  Barbarians gain several special abilities at Rank 1 (Track, Berserk, and Ride Warhorse), and they gain a super-berserk ability at Rank 8 called Bloodrage.  Player Tip: Choose a Barbarian if you want the savage juggernaut who can mow down adversaries and has little use for fancified concepts of honor.

Sorceror
These are the prototypical wizards, such as Gandalf or a D&D Magic User.  Oddly, they are all left-handed! Due to severe combat and spell-casting penalties, few Sorcerors wear anything heavier than padded armour.  They are weak in combat.  In addition to spells, Sorcerors gain special abilities starting at Rank 4 and continuing through Rank 10 (Calligraphy, Alchemy, Artifice, and Use of Wands).  For example, they gain Calligraphy at Rank 4.  This grants them the ability to write magical scrolls.  Player Tip: Choose a Sorceror if you want to be the arcane master creating scrolls, potions and wands in his workshop but equally adept at blasting his foes with a jet of flame from his fingertips.

Mystic
Mystics rely solely upon the power of their minds, eschewing such occult fripperies as wands.  In addition to their normal selection of spells, Mystics can also choose one spell to Master (and they can change the selected spell each time they gain Rank).  This spell is always "on" and doesn't require any psychic fatigue or Magic Points to cast.  Mystics can wear up to a mail hauberk without penalty.  In addition to their spells, Mystics gain Premonition and ESP at Rank 1, Enchantment of Arms and Armour at Rank 4, and Adepthood at Rank 8.  Player Tip: Choose a Mystic if you want to be the mysterious psychic/psionist who can read minds, heal the body, create magical arms & armour, and eventually take his mental abilities beyond that of any mortal being.

Elementalist
Elementalists are the druids and shamans of Dragon Warriors, using their willpower and cleverness to harness the very elements of nature.  Elementalists can specialize in Fire, Air, Water, Earth or Darkness.  Elementalists are just as weak in combat as Sorcerors, rarely using anything beyond padded armour.  However, Elementalists have many powers in addition to spells.  They all have Raw Power, which is seperate from magic.  For example, a Fire Elementalist can shoot out a jet of flame doing massive damage to foes.  And Elementalists gain many resistances to their own element.  So an Air Elementalist has huge defense bonuses against magical and mundane hurricanes, wind, tornadoes, etc.  Player Tip: Choose an Elementalist if you like the idea of bending nature to your awesome will, similar to Storm of the X-Men or the Human Torch of the Fantastic Four.

Warlock
Warlocks are the human equivalent of a F/MU multi-class (very similar to B/X elves).  They are master of both sword and spell.  Unlike Knights and Barbarians, who are skilled in all weapons, Warlocks must specialize in specific Weapon Groups (e.g., Weapon Group 1 = Flail, Mace and Morningstar; WG 2 = Dagger, Shortsword, and Sword, etc).  Warlocks have the unusual ability of being able to cast multiple spells simultaneously in the same round.  Warlocks can wear up to chain mail and still cast spells unimpeded!  Warlocks get a number of very cool abilities starting at Rank 8.  Player Tip: Choose a Warlock if you love playing B/X Elves or AD&D F/MU.  These guys have the best of both worlds, although they are slightly weaker in combat than a Knight or Barbarian and slightly weaker at spellcasting than a Sorceror.

Assassin
Our last profession we will examine is the Assassin.  This profession is exceedingly rare, as the book states "Barely one adventurer in a hundred is an Assassin."  The Assassin in DW reminds me of a combination of warrior, monk and thief.  Assassins are strong offensively, but weak defensively.  In fact, they are penalized when wearing chain mail or plate armour.  Assassins get a wide array of special abilities, ranging from stealthy thieving skills, to combat techniques such as "Throwing Spikes," to mental techniques like "Deathvow."  Player Tip: Choose an Assassin if you like playing the evil or chaotic type and enjoy stealth, trickery, and killing.

Coming in Part 3: The Adventure!
Posted by George at 7:33 PM