Are you a cleric?  Do you feel taken for granted?  Does it irk you every time the prima donna fighting man gets the Magic Sword and the wizard gets the Wand?  You have to fight just like the fighter and take your lumps!  You have to do all the healing, and turn all the undead!  And what do you get for it when it comes time to divvy the treasure?  A mere +1 Hammer, that's what!

Well, that's about to change!  Introducing several clerical magic items sure to level the playing field with the other PC's.  Following are three new items sure to please any cleric: 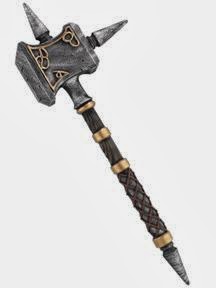 Hammer of the Gods (CL): This is a +3 Hammer usable only by Clerics.  Damage is 2-5/1-4 plus the magical bonus.  Once per day, the wielder can either touch it upon someone (including himself) to Heal 5-20hp of damage, or cast forth a “Spiritual Hammer,” which will be like the spell of the similar name but with the following characteristics: Duration: 6 rounds; To Hit Bonus: +2; Damage Bonus: +2. Note that the cleric can still fight with the hammer while the Spiritual Hammer is fighting independently.  No concentration is required. XP: 1250
War Hammer of Might (primarily CL): This is a +1 Heavy War Hammer, although in the hands of a Cleric it is +2 and does double damage on a roll of 20.  It has an immense head and can only be wielded 2-handed.  Damage is 2-9/2-11 plus the magical bonus.  XP: 1000
Potion of Undead Turning: This potion allows a PC to turn undead as a 5th level cleric.  The PC can attempt to turn undead as often as he would like during the duration of the potion, but the affect ceases after one successful turning.  Also, standard turning rules apply.  For example, the PC can’t attempt to turn the same group of undead twice.  If a Cleric quaffs this potion, he adds 3 levels to his turning ability (minimum of 5th level of effectiveness after the bonus).  XP: 500
Posted by George at 1:01 PM