This is Part 3 of my Dragon Warriors RPG summary.  I’m not sensing a lot of interest in the prior installments – Part 1 and Part 2.  I’m not sure if it’s too obscure of a RPG, thus leading to a lack of general interest.  Or maybe the way I’ve written the “review” isn’t very effective.  Instead of a review, I’ve done more of a section-by-section summary. 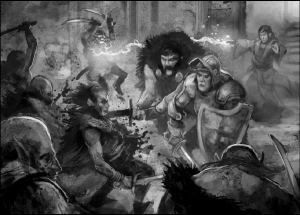 But I think it’s important to finish what one starts.  So I’m going to write the last couple parts of this game summary and finish the job!  The prior articles have focused on character options and character creation.  This one will focus on the various mechanics for exploration and combat.  Future write-ups will focus on spell casting, treasure and monsters.
DW has a full chapter on exploration rules.  This section is well written, full of great examples, and actually kind of fun to read.  Many rules will be quite familiar, so I’ll just highlight a couple items:
·    Light is a huge aspect of this game, especially since all adventurers are human; you better have plenty of torches.  And if you’re carrying a torch or lantern, you better have a hand free to hold it!  Furthermore, players cannot surprise monsters underground – since torchlight gives them away.  If torches go out, players are fighting in the dark – suffering -4 to hit and -8 to A/C!
·    Doors can be forced open, but each attempt drains 1 health point! (HP)
·    Stealth, Perception, Tracking, Evasion and Climbing are skills that require the PC to roll at or under his score (or differential) on either 1d20 or 2d10.  In some cases, these are contested (such as your Stealth vs. a sentry’s Perception) checks.
Next, we’ll discuss Combat – the meat of any rules system!  The system is a lot different than D&D and similar games.  But I really like it.  As for initiative, all combatants act in order of Reflex score (like DEX).  In a nutshell, combat is resolved as follows:
1.   To Hit Roll: To see if you hit your opponent, roll a d20 and get equal or below your Attack score minus your foe’s Defense score.  E.g., if your Attack score is 14 and your foe has a Defense of 6, you must roll equal to or less than 8 on a d20 to score a hit.
2.   Armour Bypass Roll: If your To Hit roll is successful, you then have to get past the opponent’s armour.  Each armour has an Armour Factor (from 1 for Gambeson to 5 for Plate Armour) and each weapon has an Armour Penetration Score (from d3 for a cudgel to d10 for a halberd or 2H sword).  You must roll higher than the Armour Factor to penetrate the armour and inflict damage.  E.g., if you successfully hit your plate-wearing opponent with a halberd, you must roll higher than a 5 (plate’s AF) on a d10 (halberd’s Armour Penetration).  (Potential Problem: this also means that a someone wearing plate is impervious to the blow of a cudgel or dagger.  I have a problem with this)
3.   If you successfully hit your opponent and bypass his armour, you inflict HP of damage.  This isn’t rolled for, but is a set amount for each weapon.  E.g., a shortsword inflicts 3hp, while a morning star inflicts 5hp.
Strength can play a role in combat success (STR of 16+ = +1 on Armour Bypass roll and +1 on Damage).  Shields are simple.  For any damage-causing blow, a shield user rolls a d6.  On a roll of 1, the damage is negated.  Another combat rule is that a defender can divide his Defense Factor among multiple opponents.  Finally, there is a good rule on fighting withdrawals and retreats.  Characters become unconscious at 0 hp and dead at -3 hp.
Missile Weapons are handled similarly to melee combat, except an opponent’s Defense Factor doesn’t come into play.  More so than D&D, missiles take a steep penalty and medium range and a severe penalty (-7) at long range.
One thing I really like a lot is combat penalties for wearing armour.  Knights can wear any armour without penalty, but all other professions suffer penalties if they wear heavy armour.  For example, a Barbarian suffers -2 to Attack and Defense if wearing plate.  A Wizard suffers much worse penalties, all the way up to -4 for plate.
I also like the fact that DW places realistic limitations on what can be done in a round.  For example, a PC can “take out a potion and unstopper it” in a round.  And then next round, he can drink it!  Also, a PC can drop his weapon and pull out a new weapon in a round.  Then the next round – he can attack with it!

In summary, combat is a bit more detailed than Basic D&D with more of a gritty feel.  Yet it isn't terribly complicated and seems intuitive.  I'd like to give it a go!
Posted by George at 1:51 PM