Things have been quiet the past week at the Cleaning Service.  Some of it is because I decided to cut back my posting schedule a bit.  But the other factor is that I'm switching off from running D&D to Pendragon for a while to see how we like it.  In case you're not aware, Pendragon was written by Greg Stafford (the Runequest designer) and is based around the mythos and "history" of Arthurian Britain. 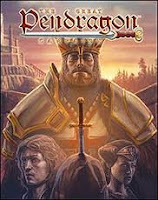 It's taken many, many hours for me to become as knowledgeable in this game as I need to be - and it's very different from D&D.  I mean - EVERYTHING is different from D&D.  In Pendragon (we'll call it KAP for King Arthur Pendragon), there is only one race to play (human) and one "class" to play (Knight).  And the game is based around many things that D&D players may not emphasize as much.  For example, there are incredibly important aspects to your PK (Player Knight) that revolve around honor, chivalry, religion (Christianity or Paganism), stewardship, loyalty, valour, love, etc.

There are "real" in-game benefits to following your Traits & Passions and it "forces" you to correctly roleplay the character as a Knight of the Arthurian times.  If you don't, you can lose XP (actually called Glory) and status in the realm.  And this is important, because in this game your reputation can help you and your entire family line.  You actually play a long-term campaign with elements such as knighthood, marriage, becoming a parent (through marriage and/or your "side wench"), fighting great battles, going on quests, and above all faithfully serving your lord and king.

Don't get me wrong, combat is still incredibly important in this game.  And it's quite lethal!  There's a pretty unforgiving combat, healing, and death dynamic to KAP.  You might run into a giant in the wilderness and he can whack you for 9d6 damage straight up!  An average starting Knight might only have 25-28 hit points so that could end it for you right quick.

This is a low-magic setting for sure.  Magic exists of course (Excalibur, Merlin, - duh!), but it tends to be more epic in nature, more rare, and truly sought after stuff.  You might base a quest of a couple years on finding a rare magic sword, for instance.  And no player Knights can cast spells.  But there are plenty of monsters to deal with.  :)

Every Knight has a "Manor," which is basically his land holdings (yes, you start off the game wealthier than 95% of those around you).  This might consist of a property that has a Great Hall, a Town, several Villages, and many acres of livestock and farming.  You are indebted to your lord, without whom you would potentially have nothing.

Anway - maybe I'll write an actual review of the rules some time.  But that's what's keeping me busy these days.

George
Posted by George at 5:19 PM

Email ThisBlogThis!Share to TwitterShare to FacebookShare to Pinterest
Labels: Pendragon