NOTE: Spoilers to Follow!  In the highly unlikely event that you're planning on running your PC's through Temple of the Frog, don't allow them to read any further.

In prior installments of the Way Back Machine, I took a look at Greyhawk (OD&D Supplement I) and much of Blackmoor (Supplement II).  Today I complete my look at Blackmoor by discussing Temple of the Frog (TOTF) by Dave Arneson, which I believe is the first ever published RPG module.

TOTF is in Section 3 of Blackmoor - Underworld & Wilderness Adventures.  It's just kind of "there," with no instructions or explanation of how to use it.  It's grand, wonderful, gonzo - and at the same time maddeningly frustrating.  If I was a new DM back in the 1970's and I decided to run my players through this adventure, I think it would be a difficult task indeed.  Has anyone out there successfully used the module as written?  Just curious. 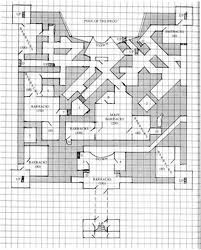 A full 21 pages in length, TOTF contains no less than six maps and several illustrations.  There are a couple of overland maps (city map, for one) and 4 "dungeon" or "temple" maps.  In my opinion, the maps are quite well done and really give the early D&D player a sense of what a dungeon should look like.  The illustrations peppered throughout TOTF have NOTHING to do with the content of the module, but they are nice pictures.

The basic theme of TOTF is explained in the Background section.  A weird, scientific cult called "The Brothers of the Swamp" has apparently done genetic experimentation to launch animals to the top of the food chain and supplant man.  Nasty!  Specifically, the cultists developed a ferocious Killer Frog.  These frogs even had a sacrificial temple where screaming victims were fed to them.  Another order called the "Keepers of the Frogs" tended to the beasts over the years - herding them and feeding them in vast underground catacombs.  The Brothers send out secret traders to buy human slaves in exchange for fabrics and medicines.  However, trade has been slow due to the swampy location of the Temple and the fact that no lawful merchants would sell slaves to evil amphibian-frog-temply guys.  They eventually had to "sell out" by allowing evil bandits to trade for them.  Unfortunately, the evil bandits and other riff-raff now dominate the temple.

Then along came Stephen the Rock, a weird magician who wanted to restore the temple to its original frog-worshipping purpose.  Anyone who disagreed with him was "cast into the breeding pools" or "struck down by lightning."  A great power struggle ensued and many people were slain on both sides, but eventually the bandits were driven off or enslaved.  The temple has now been refortified, and anyone with knowledge of its whereabouts has been slain.  Thus, it is now SECRET again!  And the Temple denizens are once again up to their nefarious, no-good, frog-worshipping activities again.  Stephen the Rock is now High Priest.

So presumably the PC's will need to find the temple, sneak up to it without being eaten by killer frogs or captured, and loot it or destroy it.  What is their motivation for doing so?  We're not really sure, so the DM must come up with a hook.

As for the room contents, these are both fun and frustrating.  First of all, the rooms vary so much in sheer power of the inhabitants that it's really hard to figure out what level of party should adventure in TOTF.  It really throws any concepts of "balance" out the window.  I guess in the "old days," you would just march in with your party of 15 adventurers and systematically reave the place.  When the old PC's died, replace them with new ones.  :)

And this place is no joke.  There are literally THOUSANDS of guards and warriors at the Temple and the surrounding city.  It kind of reminds me of "D3 - the Vault of the Drow" in terms of this vast, evil city.  How do you infiltrate it?  You can't possibly hope to slay 2,000 guards and 5,000 killer frogs.  So you need a plan.  You need some kind of strategy and stealthy approach.

Second, the DM must do a LOT of work to make this module playable.  For example, there are a number of Living Quarters for the Brothers.  But listen to this description of potential treasure: "Although sparsely furnished, each wooden item is made from the finest mahogany, the sleeping mattresses are of down feathers, the rugs of the finest furs, and all the smaller items are without question made of durable and exquisite semi-precious metal."  So that means you as the DM need to go through and assign value to these items, particularly the rare furs and the small, semi-precious items.  And believe me - there are LOTS of rooms like this.

Monster descriptions are equally vague: "This barracks holds 40 men.  There is a light light dart thrower on the roof."  Again, there are many room descriptions like this.  Who are these men?  How powerful are they?  What is their purpose?

Ladies and gentlemen, nothing in this adventure is statted out.  As the DM, you must be nimble and creative and willing to put some time into it.

Despite these frustrating descriptions, it is still a wonderful read.  Some examples of the fun & gonzo aspects of TOTF:
Anyway, those are examples of the wildness that is TOTF.  The treasure is big and spectacular, the rooms are filled with wild beasts and hordes of soldiers.  I don't think I would ever run it as written, but it was fun to read.
Posted by George at 9:14 AM

Email ThisBlogThis!Share to TwitterShare to FacebookShare to Pinterest
Labels: Blackmoor, Temple of the Frog, Way Back Machine